Collection of contemporary art in the Digne area

Home / Collection of contemporary art in the Digne area

Collection of contemporary art in the Digne area

“In the act of walking, there is movement from one point to another,

but above all there is an effort, an intention,

which makes the discovery of each artwork more intense and intimate.” 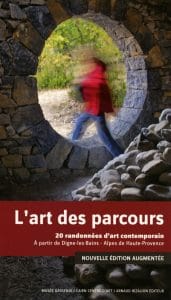 Created in 2000 on the initiative of the Gassendi Museum, the CAIRN art center has invited many artists to produce works on the territory of the Geopark of Haute Provence, comprising some twenty communes over more than 200,000 hectares. Long periods of residence allow artists to explore these lands where cultural and natural heritage are mutually enriching. The works conceived in situ are  closely linked to the characteristics of these places, to the geological, historical and cultural specificities that have been juxtaposed over time. “I see the landscape as a succession of layers of which I would be the last stratum”,* says Andy Goldsworthy, one of the artists presented in this atypical collection “fragmented” over the territory.

The peculiarity of the geological phenomena shaping the turned landscapes of the Alpes de Haute-Provence is a source of inspiration for other international artists, such as herman de vries (windows, 2004-2007, looking inside the rock) and Paul Armand Gette (Proposition transectacle from Digne to Auzet and vice versa, 2011, consisting of 0m. stations, posed along a route that crosses millions of years up the Bès valley)

The human presence, which has played a fundamental role in the evolution of the low-alpine landscape, is not neglected by artists, whose works reveal the traces of a once intense agricultural and pastoral life. Linking three dry stone sculptures that mark the entrance to the Geological Reserve (Sentinels), Andy Goldsworthy‘s circuit of Art Refuges is a work to be walked and lived in. For 150 km, the circuit follows the old paths that connect the ruined hamlets, where old buildings have been restored. These works of art** allow to welcome a sculpture but also to shelter the hiker during a quick stop or during a whole night.

The proposed itineraries are thus an invitation to follow the slow and progressive rhythm of exploration by walking, far from the panting speed that carries contemporary man towards a frantic daily run. The work of art, crossed by chance along the route or unearthed as a result of an itinerant quest, renews at each encounter a singular surprise, integrating our presence in the environment. Moving around on foot makes it easier to understand the spaces in their configuration, it allows us to integrate the connections between one valley and another, between one village and another, it increases the distance between our era and previous eras.

It is a global reading of the territory as proposed by Richard Nonas in his work Col of the second day (2018), which is in line with the alignments of prehistoric menhirs. Consisting of wooden assemblies positioned between two peaks on the southern slope of the Cousson, the work is not reduced to its site of implantation but animates the movement and connections between two points, the interstice between the two peaks. (…) The itinerary is made with the Sentier Marcel where the artist Till Roeskens transposes on the path between the village and the sheepfold, the story of the shepherd Marcel, having lived his life in these mountains of Haute-Bléone. The unusual nature of this territory has allowed other artists to create a dialogue between mythological beliefs and scientific evidence, weaving links between landscape and archaeology. From the room in the Gassendi Museum dedicated to him, Joan Fontcuberta‘s story-fiction of the Hydropithecus accompanies us on a discovery of the dens and cliffs around Digne, preserving the traces of these legendary beings.

These artistic itineraries are an invitation to follow the perpetual movement of what surrounds us: from plants to animals, from streams to stars, from men to stories. Because walking is also participating in the flow.

*Andy Goldsworthy, excerpt from an interview conducted on April 11, 2002 at the time of the realization of Refuge d’Art de Thoard

**This notion was introduced by the historian Fabien Faure in Oeuvres-lieux et lieux autres, unpublished thesis, 2003.

Giulia Pagnetti, art historian and head of CAIRN between 2016 and 2019. Excerpts from the introductory text of “L’art des parcours”

Find the edition of the guide “L’art des parcours” to discover the artworks in Haute-Provence.

20 mapped itineraries to discover the collection of open-air works in the UNESCO Geopark of Haute-Provence!

In addition to the description of the routes, this guide presents the works as well as texts on the work of the artists and the history of this project.

Published by Arnaud Bizalion. On sale at the shop of the CAIRN art center and the Gassendi Museum. 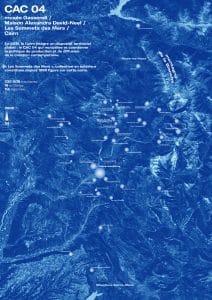 Antoine Boudin, Map from the “Top of the Seas” collection, made for the exhibition Flash-back, A Brief History of the Cairn. © Antoine Boudin