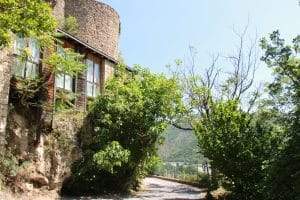 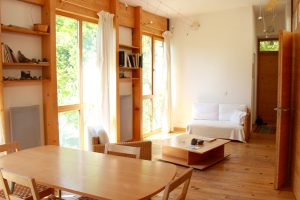 The CAIRN art center welcomes artists by invitation, for the production of artworks or exhibitions, and by call for applications for a research residency.

Financed thanks to the support of the DRAC – Regional Direction of Cultural Affairs – Provence-Alpes-Côte d’Azur, the residency is aimed at professional artists who wish to develop their approach in resonance with the multiple aspects of the Dignois territory: its geological and natural heritage, but also its history and recent developments.

Supported by the art center’s team, the resident artist will have the opportunity to open his or her approach to contact with scientists and specialists in several disciplines. If the project requires it, the art center’s team also undertakes to liaise with schools, residents and local associations.

The artist in residency at the CAIRN is welcomed in a residence located in the Saint-Benoît park, in the Haute-Provence Geopark’s heart. This accommodation overlooks the Bléone valley and offers a view of the surrounding mountains. The setting of the residence allows the artist to discover the surrounding sites by offering an immersion in the landscape as well as a space for reflection, incubation and experimentation.

The call for applications is launched at the end of the year and offers a fellowship for a 6-week residency.

Yamile VILLAMIL ROJAS – laureate of the 2019 call for applications

The report of the residence is planned for automne of 2020 in digital format.

Yamile Villamil Rojas, Colombian artist and researcher living in France since 2013, is interested in collaborative practices in art and works more specifically around popular and secular rituals. Encounter is a fundamental dimension of her projects which question notions of identity, otherness, cultures and territories. Her approach is part of a participatory art history in which the idea is to create in the social space (and to be interested in its realities) rather than in the studio, collectively rather than in isolation. The work is not the fruit of the work of the artist alone, but that of a collaboration in the presence of the artist and volunteers.

In residency at CAIRN, she chose to start with the figure of the Minkas* in order to establish a “circle of speech and thought” with the inhabitants and/or interlocutors linked to the Dignois associative network and thus engage in a reflection on the body as “extension or avatar of the land we inhabit” (Yamile Villamil Rojas). The objective, according to the artist, is to question the way in which individual and collective memory builds a “refuge” through the body, the works, the objects, the archives but also through a certain ecology of the relationship. To bring out and (re)construct the memory of a territory by collaborating with its everyday actors to contribute to the reinvention of the collective’s possible forms and places.

* A gathering practice set up by the indigenous people on the American continent in which a community engages in a dialogue that must support individual and collective memory, weaving the fabric of a society or culture. (about the artist in her intention note)

Yamile Villamil Rojas was born in 1985 in Bogotá. She lives and works in Paris since 2014. Artist and researcher, she obtained a Master 1 in Aesthetics, Practice and History of Plastic Arts and a Master 2 in Media, Design and Contemporary Art at the University of Paris 8. Currently, Yamile Villamil Rojas is pursuing a PhD in Arts and Languages at EHESS in Paris and has completed several co-creation projects in France and Colombia. His projects have been presented in solo and group exhibitions such as Visions Magiques (José Celestino Mutis Botanical Garden – Bogotà), Ici & ailleurs (Espace Khiasma, Paris), Papier Machine (Levi Strauss Library, Paris). Yamile Villamil Rojas conducts “creative mediations” (Nous ne sommes pas le nombre que nous croyez être, Béton salon centre d’art et de recherche, Paris) and regularly intervenes in publications and as a lecturer (museums and cultural centres in France and Colombia). 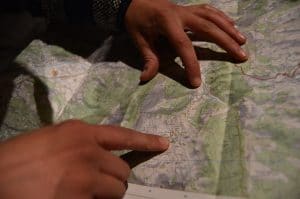 In the particular context of the year 2020 and in support of contemporary creation, the art centre has launched an exceptional residency program to welcome three artists for a three-week residency.

The bridges that punctuate the Haute-Bléone are as many stopping points, observatories to capture the landscape variations along the river… Here the Mousteiret bridge near the Brusquet and details of the Marcoux bridge.

From 13 July to 2 August, the CAIRN invites Amandine Maria for a mapping project centred around the Bléone, affluent of the Durance, a river which rises at the foot of the Tête de l’Estrop (2,961 m) and the Trois-Evêchés (2,819 m) and which flows between the two communes of Château-Arnoux Saint-Auban and Les Mées, at an altitude of 408 metres.

Amandine Maria lives and works in Vitrolles. Artist and landscape designer, she graduated from a Master II in arts in Aix-en-Provence (2007) and from the Ecole Nationale Supérieure du Paysage de Versailles (2011). Her Master’s thesis focuses on the figure of the artist gardener, which she continues to summon by carrying out various cultural projects around the garden. Interested in the links between landscape and contemporary art, she created the association Topothymie.Her double training allows her to develop an approach that is both sensitive and technical. Cartography, at the heart of her approach, is seen as a means of transcribing lived experiences. His “walking maps” mix the aerial point of view and the point of view of the person who lives an experience in time and landscape. By revealing the full potential of the places experienced by their inhabitants, the maps poetically express the landscape and sociological stakes of a territory. While several organizations in charge of the environment and urban planning have work with her, Amandine Maria is simultaneously conducting purely artistic research and exhibiting in numerous events and contemporary art galleries (such as the Fernand Léger art center in Port de Bouc in 2019, the Camargo Foundation in Cassis and the Vieille Charité in Marseille in 2018, etc.).

Cairn – Could you come back to the term “sensitive cartography” that you use to talk about your work and explain why you are interested in this notion?

Amandine Maria – “Classical cartography offers a “objective” vision of a territory. The sensitive map, on the contrary, will allow us to understand a place through an experience on the site. This form of cartography is based on the ephemeral, the fleetingness of a moment, the instability of a state. This exercise of the body’s capture of the territory can be broken down into several indicators. The site is revealed through sound, smell, sight, taste. But just as much by the thoughts it suggests allowed by the culture and the past of the person in question. What interests me is to understand what is at stake in a territory through the exploration of purely subjective data. The sensitive map allows this great gap between an impassable reality and a reality that has to do with the imaginary narrative. The landscape seems to be situated in this in-between. 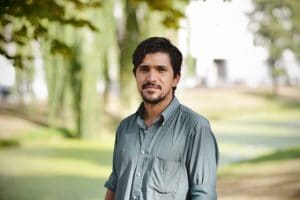 Francisco Navarrete Sitja studied visual arts at the State University of Chile, and fine arts at the University of Barcelona. He is a graduate of the Independent Studies Program of the MACBA, Museum of Contemporary Art of Barcelona MACBA. He currently participates in the international TSOEG network “Temporal School of Experimental Geography” (UK) and is co-director of L’Aquila Reale: Centro d’Arte e Natura di Civitella di Licenza in Valle Dell’Aniene, Italy. He has exhibited throughout the world, both alone and in groups, and has participated in numerous residency programs. 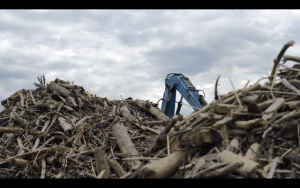 His research is embedded in socio-cultural and geographical dynamics. One of his favorite themes is the concept of “Chilean Switzerland”. Initially used around 1930-1950. Chilean Switzerland delimits the region of Araucania (whose capital Temuco is located 640 km south of Santiago de Chile). Based on the notion of “virgin nature”, the concept spread through various graphic and literary representations. Francisco Navarrete Sitja’s work questions the stereotypes of landscapes and the historical analogy that this concept has established between Chilean and Swiss geography, contributing over time to redefine the Araucanian territory and its collective memory through European landscapes.
Francisco Navarrete explores this duplication of landscape scenarios in Chile and the impact of the homologation of this concept on social-territorial imaginaries, in an attempt to reveal how it has contributed to “nationalizing nature” and obscuring the Mapuche culture.
Francisco Navarrete Sitja will participate in 2019 in two field experiments: the first was in the cantons of Vaud and Valais in Switzerland, and the other in southern Chile. He will immerse himself in the “alpine” and “araucanian” experience, in order to explore thanks to the stories and elements collected (photos, archives, drawings, texts, diagrams, collages, legal documents, video and sound fragments? ) the analogies and stereotypes of the two territories. All this material will be used to produce a video essay and a publication. Francisco Navarrete Sitja’s residency at CAIRN art center is a creative aid that will allow him to develop and pursue this project.