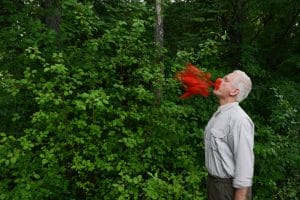 Andy Goldsworthy gives us his breath for this anniversary!

Through the exploration of many archives, this exhibition will present an overview of the projects carried out since the creation of the art centre in 2000 and will attempt to reflect the spirit of the CAIRN, on a small and large scale, from the exhibition space to the geological reserve’s territory.

Beyond a restitution linked to the memory of the place, the exhibition will give an account of the art center’s current situation with regard to the artistic practices associated with it: the relationship to the site, to the territory, to walking and to “nature”. If the word cairn designates these stone pyramids erected by walkers as a directional sign, it is also the founding acronym of : Informal Art Center for Nature Research.
The CAIRN art center is a space for experimentation around an issue that is today at the heart of debates, concerns and mobilisations: nature. A nature which is not to be considered as external to human societies but produced, worked, transformed. For 20 years, CAIRN has favoured the invitation of artists who question our relationship with nature and who propose a plural and renewed approach.
The exhibition will be accompanied by “highlights”, on the evening of the opening and throughout the exhibition: a walk to discover the works in the mountains, meetings and conferences with the essential actors of a history that must be transmitted, but also with art historians, researchers and artists whose work questions the relationship between art and nature, the relationship to the site, the territory and the living in the context of our ecological crisis.