I’m concerned about human and non-human communities affected by climate change and other ecological impacts of the Anthropocene. Today’s environmental problems are global in magnitude and complexity. To deal with these issues, we need the creativity of artists, scientists and those who focus on other disciplines to creatively take up the challenges we and other species currently face.

For my projects, I collaborate with diverse communities of various age groups, specialists (in art and science) and local people to create transdisciplinary artworks through participatory scientific programmes that lead to actions and installations. These works are the subject of collective researches carried out by interdisciplinary groups and are often physically constructed from biological and other materials collected locally.

The underlying objective is to increase the understanding of localized environmental problems while being aware that each of us, as individuals, has an impact and can make a difference in our global environment. (Brandon Ballengée)

For more than twenty years, Brandon Ballengée, an American artist, biologist and environmental activist, has been working to bridge the gap between art and science. His scientific and ecological research in the field and in the laboratory is the foundation of a multiform artwork that often echoes with history and techniques of representation that come from the art field. His work is disseminated within the scientific community but also exhibited in many cultural institutions around the world. By using a plurality of media, the artist thwarts the rules of museum space, a static and controlled environment, by establishing organic structures that reflect the chaos inherent in the evolution process and what we have become accustomed to calling “nature”. This exhibition will present the work of an artist inspired by the study of biodiversity, concerned about climate change and the accelerated decline of species. It will be part of a questioning of museum rules that is in line with the transversal approaches supported by the CAIRN art centre (and the Gassendi Museum).
In Louisiana, where he resides, Brandon Ballengée leads “eco-actions” combining artistic practices and participatory sciences in order to raise awareness of ecosystems through field research. His focus is on direct experience of the biological world, he studies and observes amphibians, birds, fish and insects that evolve in natural or artificial environments. Surveys that allow this bio-artist to draw up an inventory of the state of health of our ecosystems. 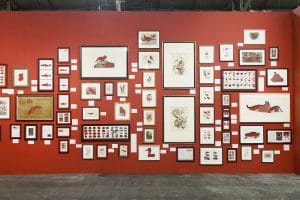 Brandon Ballengée was born in 1974. He lives and works in Louisiana and is one of the representatives of the international ecological arts movement. Since 1996, one of its main centres of study has been the emergence of developmental malformations and the decline of amphibian populations. Currently a postdoctoral researcher in the Department of Biological Sciences at Louisiana State University, he is studying the impact on fishes of the 2010 oil spill (Deepwater Horizon) in the Gulf of Mexico. This project, entitled Crude Life Portable Museum, is subsidized by the National Academies Keck Futures Initiative (NAKFI) and the National Academies of Sciences, Engineering and Medicine.
Ballengée’s artwork has already been exhibited in the United States and in more than 20 countries, including Canada, Argentina, England, Germany, Italy, Spain, the Netherlands, Slovenia, Russia, India, China, South Korea and Australia.

In France his work was shown in 2013 at the Château de Chamarande (Essonne). A retrospective of his artwork was inaugurated in the fall 2016 at the University of Wyoming Art Museum (Laramie). Several articles have been published in American and national publications, including ARTnews, Art in America, The New York Times, New Yorker, The New York Times Magazine (USA), Beaux Arts, Billebaude, Liberation, L’Oeil (France), Greenpeace Magazin (Germany), The Observer, The Guardian, BBC News (England), D’Ars, Domenica, Il Venerdi (Italy), SNACKS (China), The Sunday Guardian : New Delhi (India) and others.