Conservation par gethan&myles
Exhibition of the restitution of a participatory project
at Musée Gassendi, from 17 September to 5 November 2017

“Conservation: of nature, of heritage, of identity… Paradoxically, man – the great destroyer – has long sought to protect and preserve. This desire to maintain the elements in a state of constancy fascinates us. Fear? Hubris? Human kindness? Natually, it’s important to safeguard, but how to resist movement, the mutability of the world? The river flows on (calmly or otherwise). Time passes. Birth, death. Birth, death. Birth… And so it goes. Yet, faced with the enormity of time, we dig our heels in and push against the tide: foolishly, madly, beautifully”. 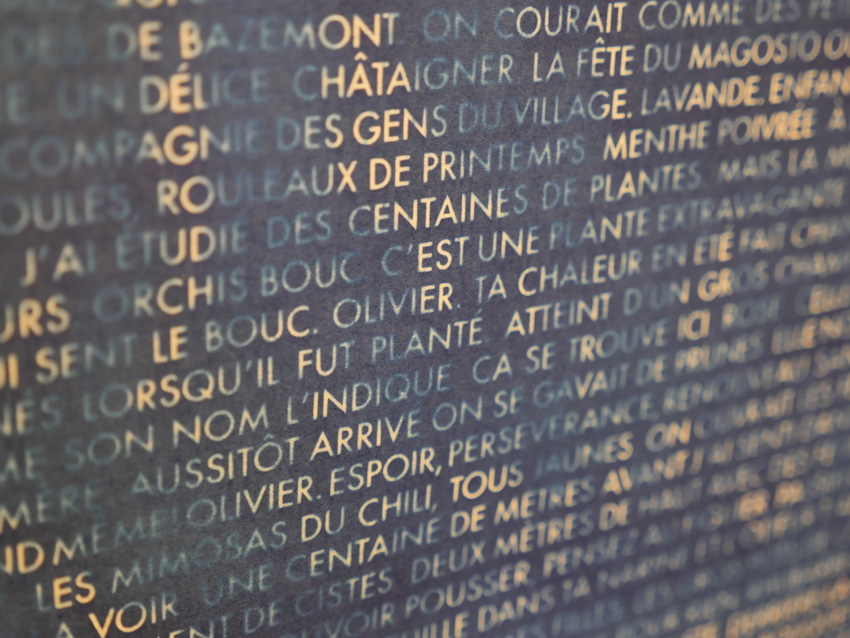 The Musée Gassendi is currently hosting the restitution of Conservation. A large-scale participatory project conducted by artists gethan&myles in the Digne area since autumn 2016, it was instigated by CAIRN Centre d’Art, in partnership with the association A Fleur de Pierre and the Musée Promenade.

The exhibition presents itself as a constellation of stories and memories, the result of the encounter with places, with people and with their individual and shared experiences. It talks of growth and change, traces and transitions. Cyanotype (an early photographic procedure popular with 19th century botanists) photograms were created on mountainsides and abandonned villages using the sun and the water of the region. They carry memories of the places explored and moments shared between the artists and more than a hundred inhabitants of Digne. These cyanotypes refer us to the universe of memory, to the effort to stop and preserve the image of a precise place and time.

For gethan&myles, the process of creation and the experience of the participants are an integral part of the work. Alchemies / Jam Tomorrow are collective transformations. Jams, chutneys, eaux de vies, conserves made from fruits gathered during group explorations of abandoned sites and their orchards. Quintessence of sunlight and water, of the geology and vital energy that brings seed to fruit, these alchemies evoke the recent past of these places – where men and women had to fight for survival in the face of a nature that was both generous and merciless, and which lives long beyond them. 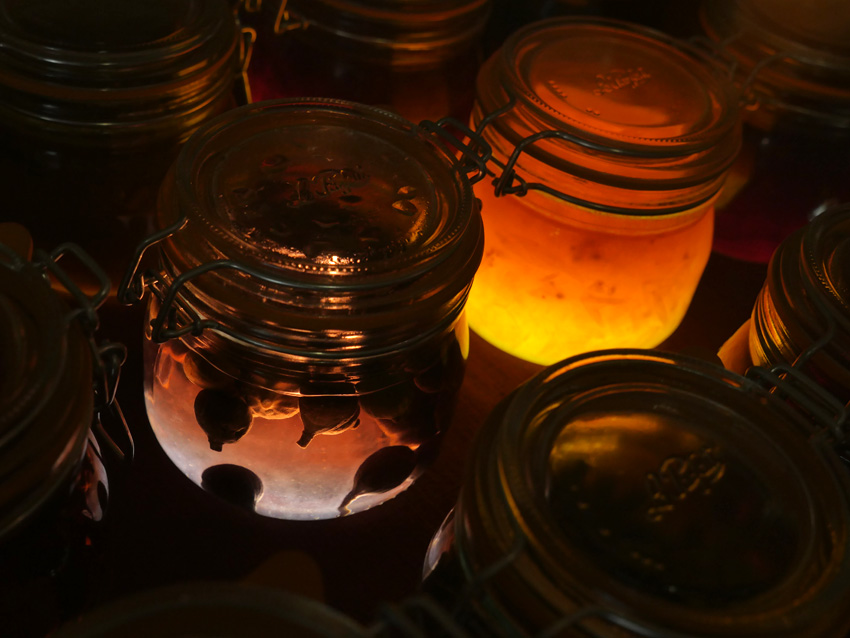 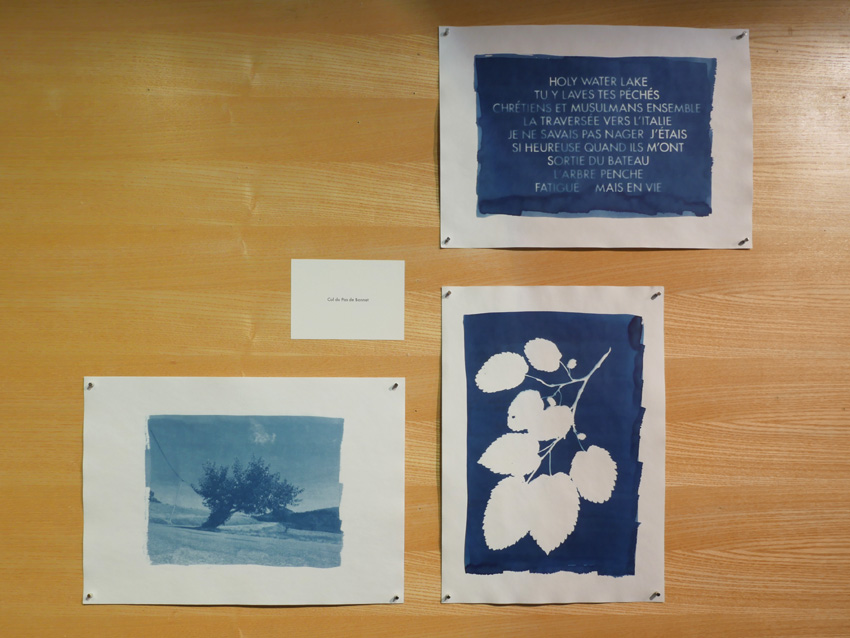 Co-creation is also integral to the two installations that connect the exhibition space and the gardens of the Musée Promenade. The first, Anthologie, is a cyanotype made up of anecdotes and memories about plants – fruits, flowers, trees, spices – that have left their roots in the minds of each of the projects participants. A rich and tangled portrait of a people via the land and the plants that inhabit it and them. The second, Florilège, is a luminescent perspex sculpture, hand-engraved with the names of all these plants and suspended in a cascade at the Musée Promenade. Echoing the old botanical inventories exhibited elsewhere in the Musée Gassendi, these words – which appear and disappear with the movement of water and the sun – float between taxonomy and mantra; a poem of the earth and of mankind. With the passage of time and the petrifying calcite-rich water of this remarkable site, this ‘manmade’ presence will become stone in a matter of years. Nature, soil, the very rock itself, will engulf it. All we have to do is wait, and let water and limestone act: geological time on a human scale; human transience on a geological scale. 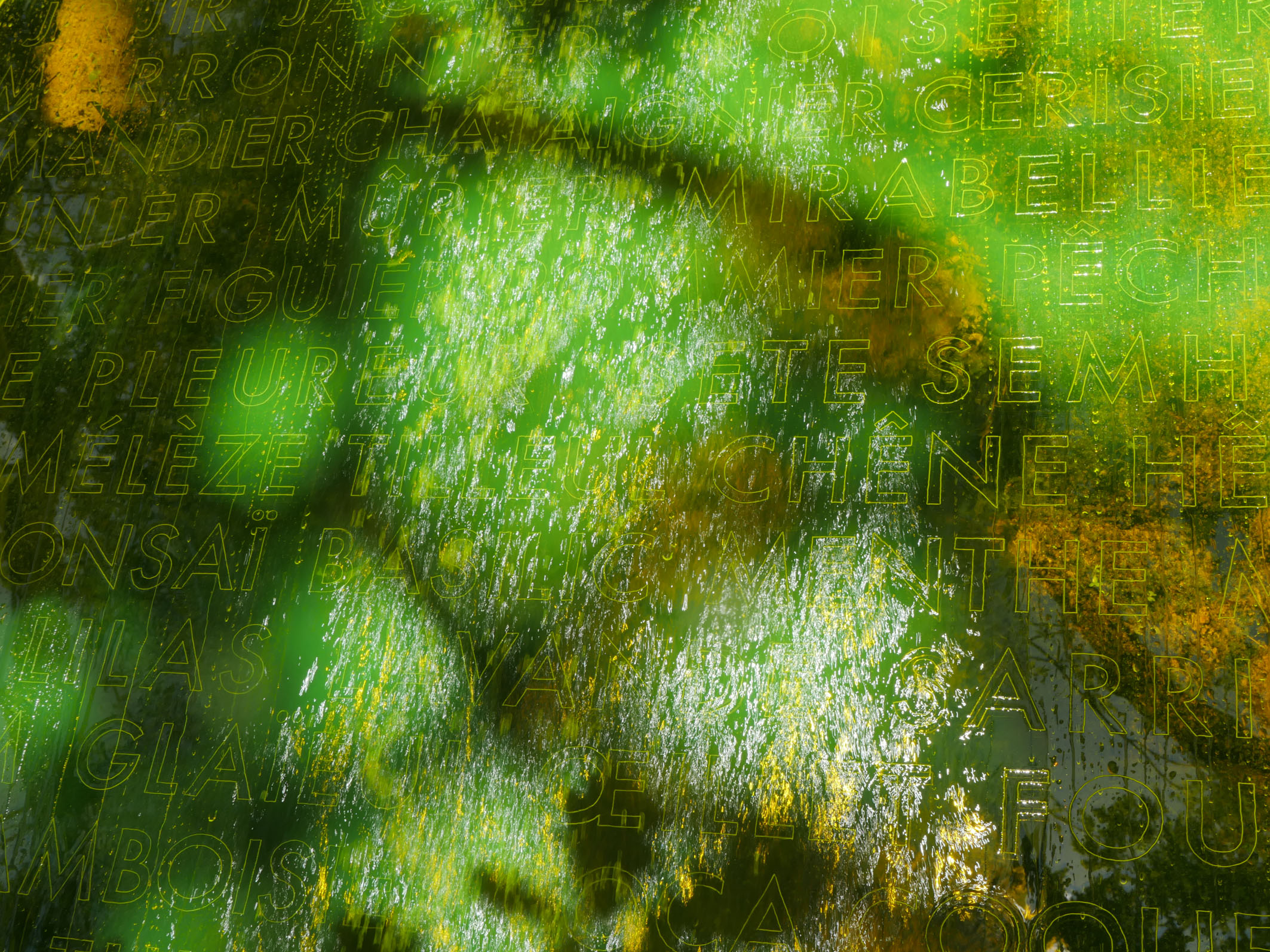 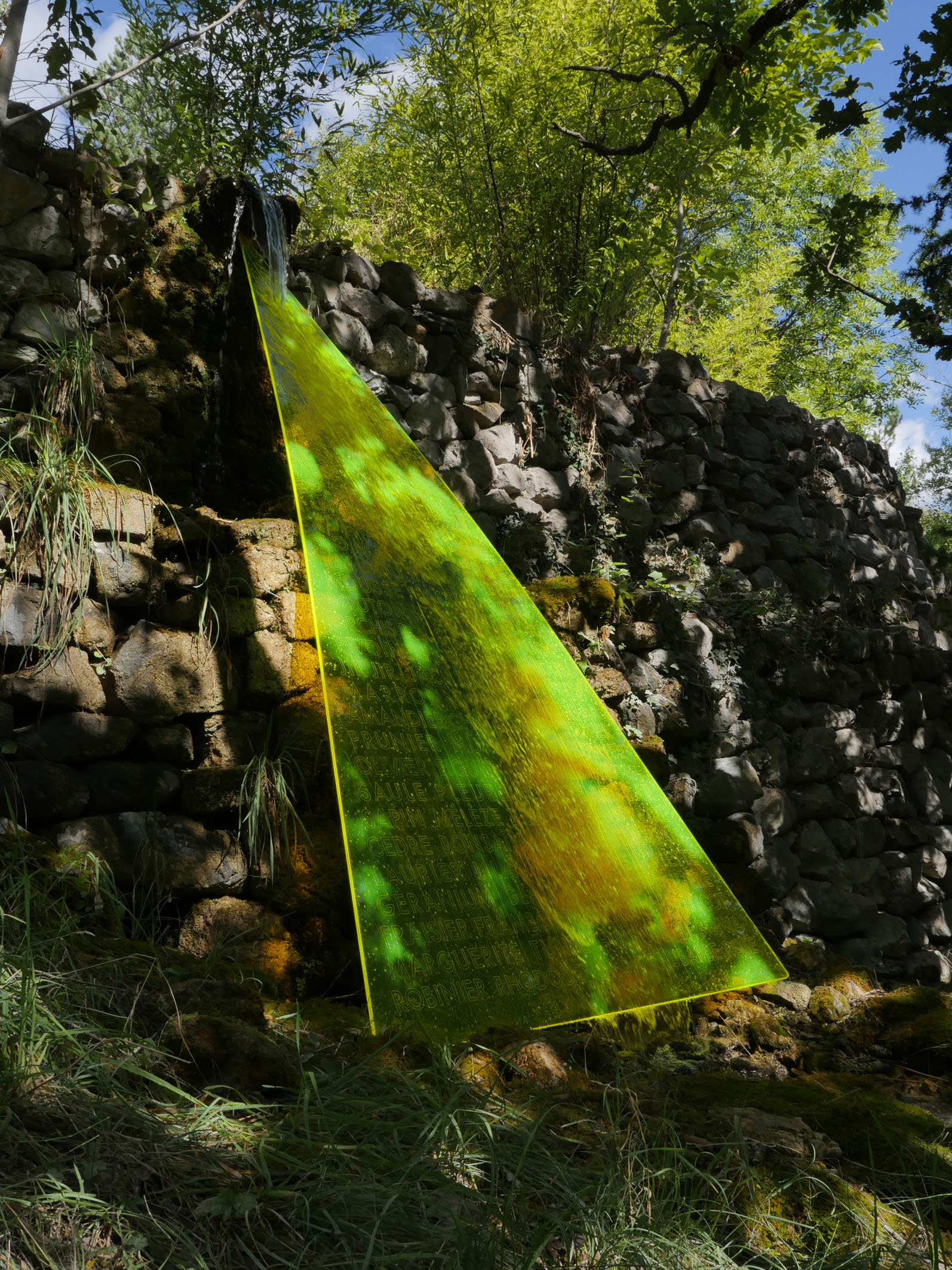 For the 2017 European Heritage days, an ephemeral collective work, Cnut’s Causeway / Famine wall # 5, had been made by a group of people in the riverbed next to the art center and the sculpture Florilège unveil in the Musée Promenade park. Both events celebrate the conclusion of the participatory project Conservation, the result of which is exhibited at the Gassendi Museum until early November. This project, built with the CAIRN art center, the Promenade Museum, A Fleur de Pierre association and the inhabitants of Digne, was created via workshops, walks and harvests bringing together long-time inhabitants and newcomers to discover the territory: its water, stones, fruits, memories. A multi-layered project, it takes its inspiration from Digne – a town ‘entre-deux’ (caught between) – and the people who live here; it explores frontiers and transitions: between “here” and “there”, town and nature, nature and man, object and emotion, vegetable and mineral, past and future. 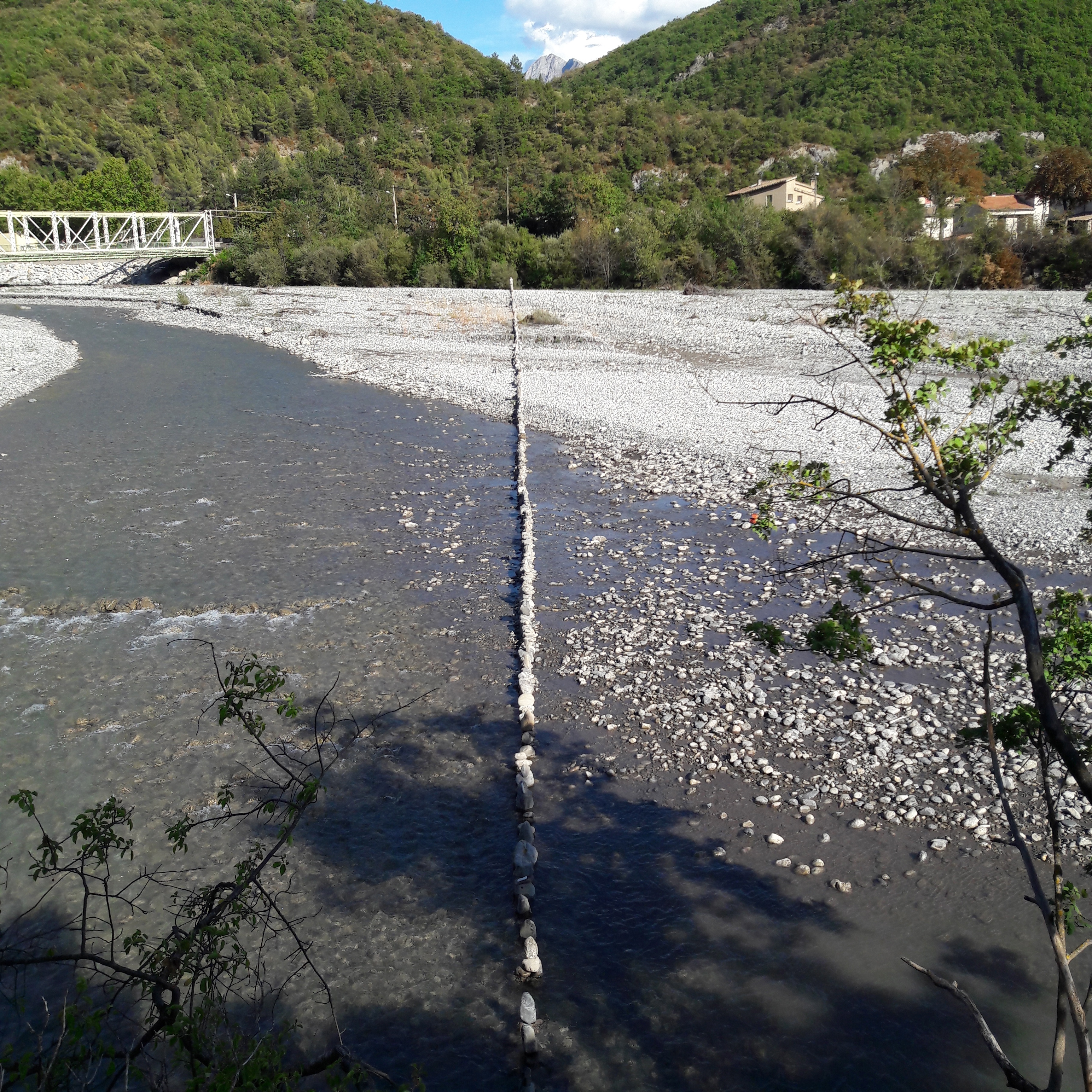 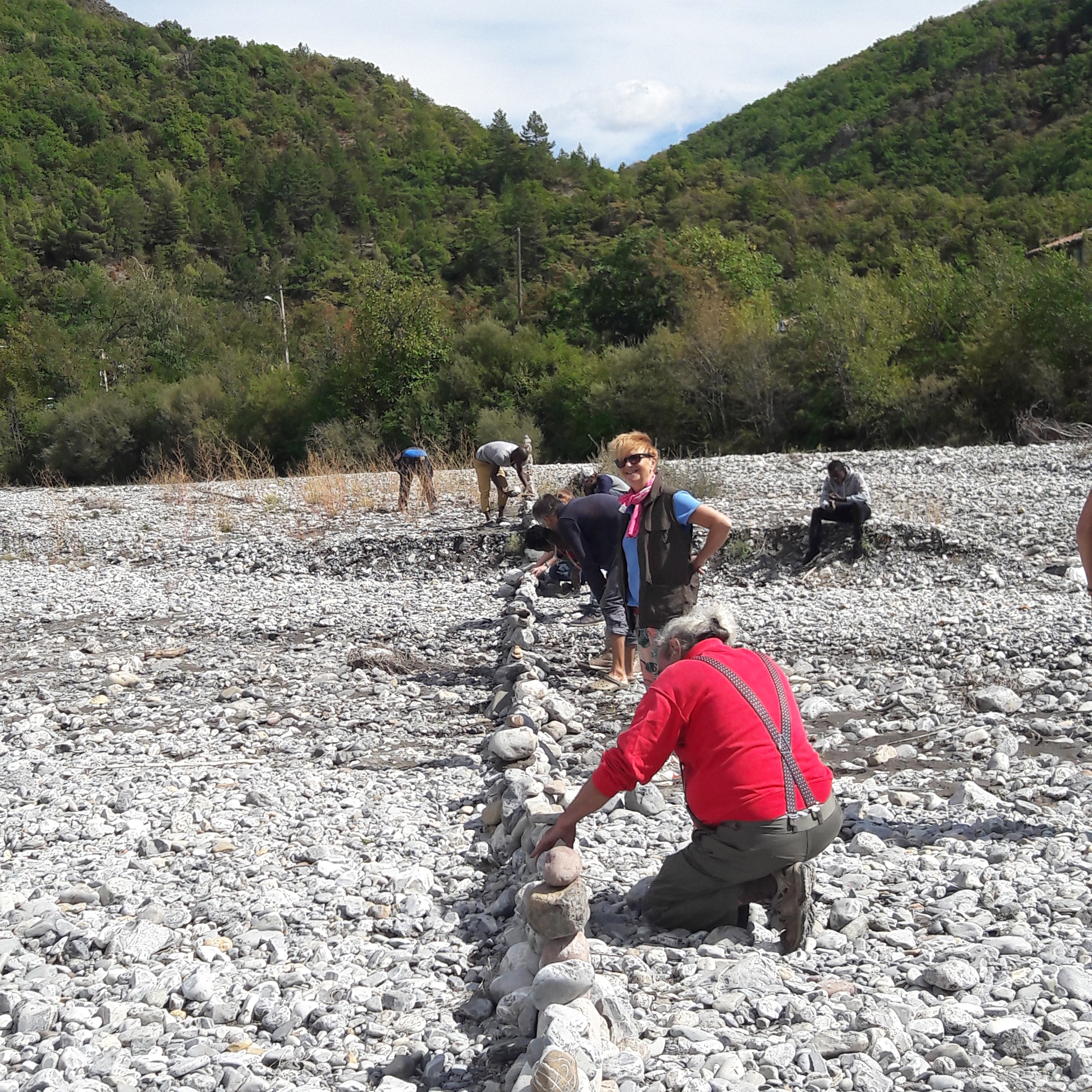 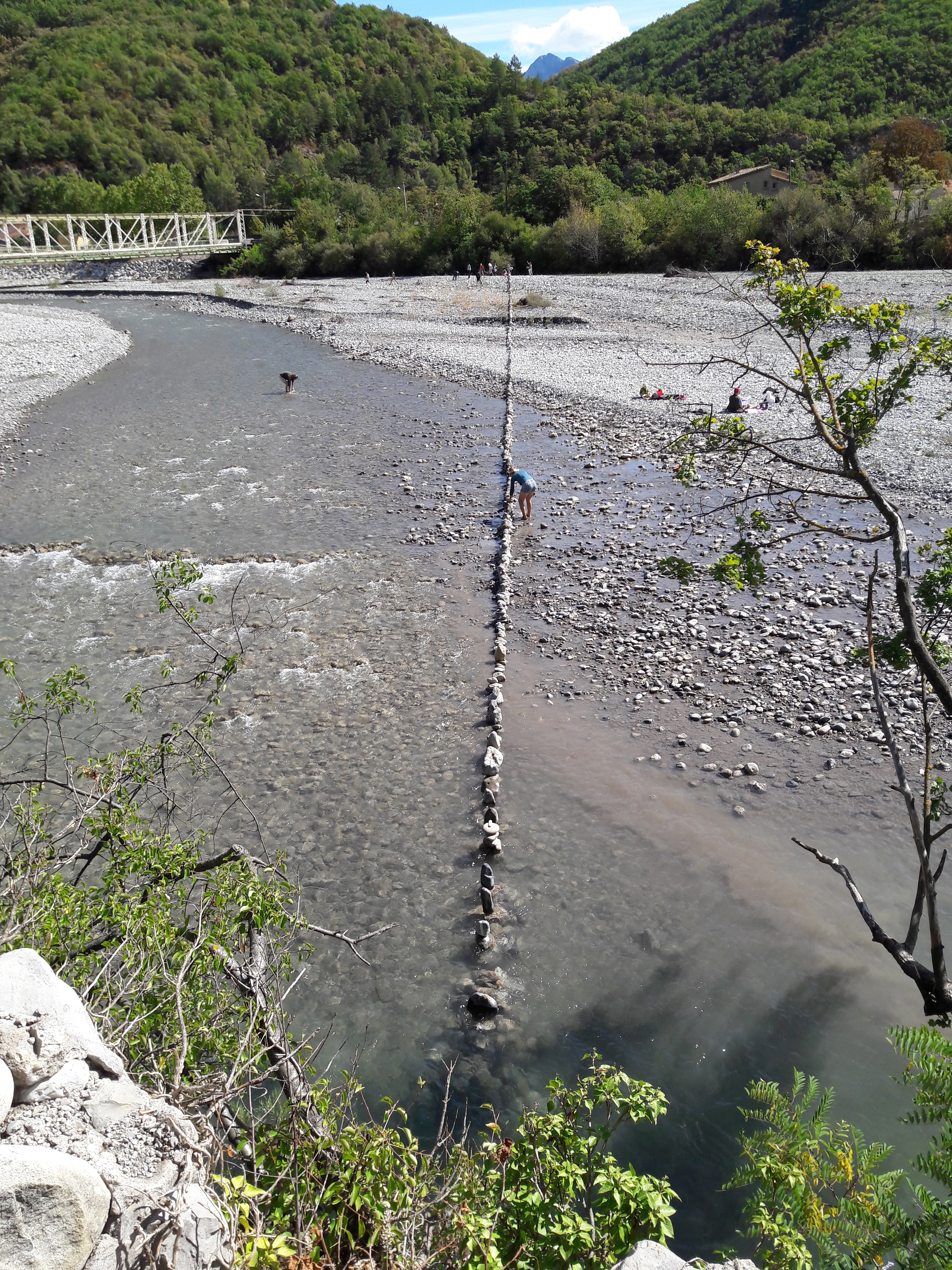 To read the full texts and visit the project archive go to : www.conservation-cairn.blogspot.fr
00 33 (0)752029444
gethanandmyles.blogspot.com