The CAIRN Art Centre presented, from 1 April to 3 June 2016, the Habere exhibition by Didier Petit. This project is the fruit of work in recent months by the artist in residence at the CAIRN Art Centre, that is, 100 drawings, in the form of paper cut-outs of sea-shells, each represented at full scale. This large series is inspired by natural history collections and the geological characteristics of the Haute-Provence Geopark, of which the artist proposes a graphic and poetic view.

Infinitive of the Latin verb Habeo

[to possess, to be master, to contain, to bear in oneself or on oneself, to bring about, to cause, to arouse a feeling, to feel an emotion, to take and keep, to hold a territory, a function or a State and to administer it, to know and have cognition (of something), to consider as, to look upon as, to hold, to occupy, to inhabit, to dwell, to spend time, to do, to care, to go (when speaking of a person’s condition)]

“I would not take for granted the definitions proposed for the word Habere because they present all the structures of a body (an organic, inorganic, mineral, terrestrial, celestial or sentimental body, etc.) and they evoke nearly all the stages of dependence, step by step, of the body in relation to itself and to others, to the stranger and to the local area.

Where possessing is both being and having at the same time, where contain, bear in oneself or on oneself, or hold relate to the internal body, as one says of the inner ear, a tympanum of oneself intensely constituted that holds me, edifies me and individualises me.

Being master of it is already more dubious, more fragile, more difficult to hold.

If I cause and arouse a feeling, it is outside of me, towards another person, but nevertheless with a feeling that is still internal, liable to give rise to an emotion in a diffuse to-and-fro in relation to others that I consider as and I look upon as in this same space of links with the stranger – I keep close watch on it!

First of all, take and keep, to hold a territory, to survive!

Constructing there a protective and sustaining function, administer it, even if this State may appear so small, it is a morphological construct that is so complex, so dense, so changeable, so multiple (to a point where one can get lost in it!), a predatory, voracious morphogenesis, in which the body of one is the body of the other, where occupying the inside of oneself, inhabiting there, living there, is having and being, knowing and having cognition of this minuscule Babel with an external skeleton, where I spend time!

To be inside oneself, to have mummified each stratum where the step to be taken (the operculum) treats the constitution as an identification in which semblance, resemblance and dissemblance are mixed.

The shellfish is this or that!

So I tend to [or take care of] the double [stand-in or alter ego], the “I is another”, the request outsidethe environment, with only one memory: the certainty of having built it!

And the sea gone with the sun…” (Didier Petit, February 2016)
As an echo of the exhibition, the CAIRN Art Centre is co-producing Didier Petit’s next book, published by Éditions Filigranes 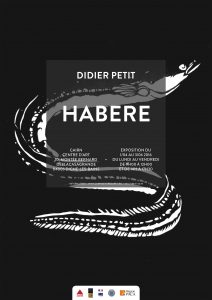