Find here the video-trace of Sylvain Gouraud’s residency project, winner of the call for applications for a research residency at CAIRN art center in 2018:

followed by opening-performance
3:00pm village of Majastres
and a friendly drink

Meeting with the artist and exhibition at the IDBL art school, Digne-les-Bains

“To live with this landscape that inhabits us, it becomes urgent to redefine together, what we valuel.”

Sylvain Gouraud is a photographer. He immerses himself in universes where the question of representation plays an essential role. First of all, in social environments lacking representation, where he questions what makes the identity of a migrant without a territory, a psychiatric patient or a prisoner in the Fleury Merogis prison. Each time the image is controversial. From the photographs taken or collected during his research, he creates composite landscapes that cross points of view and give rise to reflections on the perception and representation of a territory.

“I go up for several years in the mountains above Digne. I often go to the Estoublaisse valley behind the Montdenier. The place is difficult to access, isolated, it takes 45 minutes on the track from Saint Jurs, power lines stop well before the shelter that allows me to spend a few days there. The view is breathtaking, with no construction as far as the eye can see, the Estoublaisse stream, the forests of Levens and Guichard alternate with the Montdenier grasslands and the Chiran Rocks. We can cross a multitude of animals and flowers, a real natural space. Natural ? What does that mean ? Trees ? They were planted in the 1960s to “hold” the mountain, Frederic Serre of the ONF now seeks to regain the hardwoods. The stream ? It is maintained by the fishing company that grows its fry. The grasslands then ? But they only exist because Alain the Shepherd grazes his ewes preventing pruneliers from gaining ground. This landscape, who seems empty and wild when we arrive in the valley, is actually inhabited by multiple human and non-human souls who participate, each according to his interest, to shape this landscape. However, can we talk about artificial landscape? This distinction between the natural and the artificial is poorly placed, it doesn’t allow us to understand the world around us. To get out of this “modern” vision, we have to describe it differently with other codes, other reading grids. ” S.G.

A land depopulated since the ‘World War I’, whose rare inhabitants today preserve the memory and wonder about its future: the Estoublaisse valley, where Sylvain Gouraud, an artist photographer, has been returning regularly for several years. A place difficult to access, without any construction, where streams and forests rub shoulders with the meadows of Montdenier and the rocks of Chiran.

From the meetings with the various actors of this territory, Sylvain Gouraud collects images and stories that he uses to animate this landscape. By revealing, through the reversal of certain images, a set of interactions, the artist emerges from the classical panorama from a unique point of view and questions the artificial and western border that separates human being from nature.

The exhibition presented in the BILD room of the Digne-les-Bains art school is a restitution of this work of artistic research in situ, which was finalized with a public event organized in the Estoublaisse valley on July 28th, 2019. During this day, at the end of a collective walk in the valley, the artist activates this device under the lean-to next to the church of Majastres, in a dialogue with the inhabitants. From the revealed images, his words intersect with those of the valley’s users, revealing the complexity of the connections that help shape this territory.

By moving back and forth between the detail and the whole, Sylvain Gouraud questions a specific situation by bringing out the issues that connect the local to the global. Images become triggers for stories to generate new configurations, reverse perspectives and question the practices through which a space of cohabitation is built. 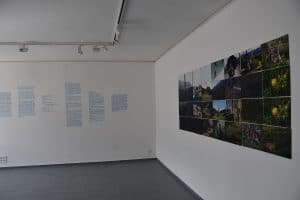 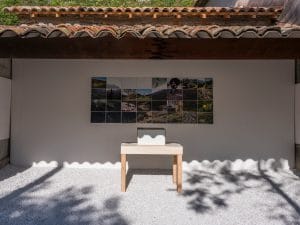 This project is the result of a research residency developed between October 2018 and July 2019, funded by the Regional Direction of Cultural Affairs Provence-Alpes-Cote d’Azur (DRAC PACA). The event is part of the “Ville-Porte” partnership between the city of Digne-les-Bains and the Verdon Regional Nature Park.