New outdoor artwork, in partnership with Gassendi Museum, within the frame of the operation “le musée sort de ses murs”, supported by the Ministry of Culture.

Col of the second day

This alignment of seventy-seven heavy oak beams installed in the valley between two mountain peaks of Cousson. The artwork is itself the “col”, the passage between those separate places. Nonas emphasizes the power of an intermediary space between the peaks, the gap that opens the way to a new reality.

His use of simple shapes and materials, set in the continuity of that expansive mountain space, brings us back to the essence of the place itself. The artwork, echos the scale of the mountain. Nonas isn’t interested
in his objects as such, but rather in what they are able to provoke through their interaction with their environment.

The potentially infinite repetition of its wooden units moves us through and along them, evoking the invisible connections that link our own mountain stories and beliefs to the past and present inhabitants of these mountains and the complex lives they have lived there.

The choice of this particular place increases that symbolic evocation. Cousson is the mountain towering over the town of Digne-les-Bains, where is located Samten Dzong (Reflection Residence in Tibetan), the home of the writer and explorer Alexandra David-Neel. Her deep lifelong spiritual quest was itself linked to the grandure, the power and the silence of the mountain lands. 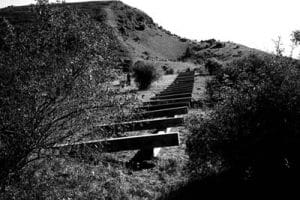 [Skilled walker, get hiking shoes and 2 litres of water per person. Picnic backpack.]

In attendance of the artist.

This project was supported by : Ministry of Culture (Direction Régionale des Affaires Culturelles Provence-Alpes-Côte d’Azur, Service des arts plastiques), Digne-les-Bains municipality.
The artwork Col of the second day is offered by Richard Nonas and Fergus McCaffrey gallery to Gassendi Museum.  Her installation was supported by the Ministry of Culture, within the frame of the action « Le musée sort de ses murs – 2018 ».

Have been participated to the production : Eric Klein – coordinator ; hélisaF enterprise.

On the same subject